Goosebumps from Skin at Wellcome 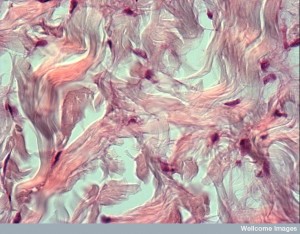 I finally got round to seeing the Skin exhibition at the Wellcome Collection, which runs until the end of the month. It may have been a mistake to see it at lunchtime, though – at least before I’d eaten.

I’m not particularly squeamish, but there is something about skin – especially detached from it’s living, breathing embodiment – that prompts discomfort, unease, even disgust.

The exhibition opens with a startling, larger-than-life photograph of a woman’s back, zipped down the spine with surgical stitching (Every One No. 14, by Sophie Ristelheuber). Frustratingly, there’s no explanation, although one assumes its an operation scar. But the black and white image is arresting, alarming even, suggesting  that the skin could be unzipped like a costume. It’s a thought that recurs through the exhibition.

The first half of the exhibition took me back to familiar ground, with etchings of ecorche models, their skin peeled back, revealing the mysteries below. Skin itself was little more than an inert covering, a disguise for the real stuff of life. In some images, models pose with their skin, negligently draped over one shoulder like something out of a fashion magazine.

Through into the next room, and the focus shifts to the skin itself, in all its lumpy, crusted, wrinkled, suppurating imperfection. Moving on from the anatomical drawings of the previous century, the anatomists and doctors of the mid-19th century had discovered that wax was an ideal medium for demonstrating the disorders of the skin.

The verisimilitude is unnerving. It’s hard to look at some of the exhibits, such as the full size wax moulage model of a young boy, his naked body plated over with barnacle-like plaques of tinea, lying curled up on a bed of white satin, as if to soothe his discomfort. Worse still is a head of a boy, displayed in a jar, looking all too much like an anatomical specimen and showing clearly the misery of the fatal skin disease that finally killed him.

It’s a jolt to remember that skin diseases can be fatal. If your skin can’t perspire, if the membrane is no longer permeable, you can die. Skin isn’t just covering, or decoration. It’s a vital organ. It would have been good to see more in the exhibition, explaining the skin’s vital roles.

But almost more spooky than these was a table of wax models of disembodied hands, detailed and life-like as anything by Ron Mueck. The hands were identified by the occupations of their ‘wearers’, as painter, bricklayer and housewife. Each hand shows the marks of age and of the diseases to which their occupation predisposed them. It made me look at my own hands – biro marks, slight callouses from holding a pen – and wonder if our hands actually reveal more about our selves than our faces?

Not all marks are involuntary, of course. A section on tattoes included a gruesome little collection of chamois-leather human skin, scrawled over with crudely executed drawings, mainly of naked women. More impressive were the images of Maori men and women with their facial tattoes.

In the last room, we were down to the level of the microscopic. Films showed images of the skin perspiring, oozing and erupting through craters in a rough landscape. Skin cells flaked like dead leaves. Finally, a blown-up video showed spots being squeezed, with long snakes of sebum spiralling out of the skin like maggots being born. Filled with disgust, I left. For once, I gave the Wellcome Cafe a miss!

← Warning: loneliness may seriously damage your health
Shining a light on schizophrenia research →